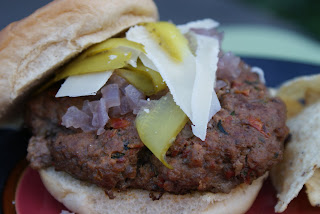 I don't know if I'd call this burger "forbidden, illicit, or subversive" like the recipes originator did but I would call it good!  The combination of tomatoes ( I used slow roasted tomatoes from a previous French Friday recipe), capers, cornichons, and spices add a dimension not common in a good old fashioned American burger, but it is very good.  Fusion food is popular these days and this is a good example of the fusion of the best of two cooking traditions.

The onion marmalade was the only disappointment.  It wasn't very marmaladey...just boiled onions with a bit of a coriander flavor.  The recipe calls for 20 minutes of cooking one medium red onion in a cup of water.  Coriander, butter, salt and pepper are the only other ingredients.  I cooked it much longer than called for, more like 45 minutes and I still poured off water before serving.  If I used this recipe again I'd caramelize the onions first and use 1/4 cup or less of water.  I'm eager to read what the other French Friday cooks thought of this.  They are a creative and opinionated bunch of good cooks!
Posted by Unknown at Friday, August 26, 2011 16 comments: Links to this post 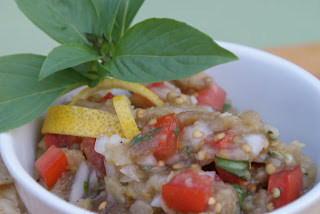 Dorie's eggplant caviar is good.  We enjoyed it immensely and made plans to share it with friends this weekend but somehow I'm not excited about it.  My husband loved it and said it tastes like guacamole.  Maybe that's why it didn't excite me.  I'm all in favor of eating a variety of vegetables but I want eggplant to taste like eggplant not avocado.  I feel like I'm being a grinch.  Wait until you see what I have to say about next week's French hamburger!  Check out the other French Friday cooks.  They always have great ideas and fun posts!
Posted by Unknown at Friday, August 19, 2011 16 comments: Links to this post

Email ThisBlogThis!Share to TwitterShare to FacebookShare to Pinterest
Labels: Around My French Table, Eggplant, French Friday

Happy Birthday to Me - Best Ever Banana Cake 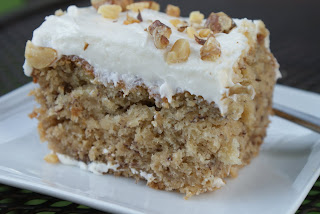 I was going to skip this birthday; 59 is just depressing!  It feels like an ending.  A friend suggested I follow in her footsteps and go straight to 60.  Be 60 for two years.  Nines are endings but tens are beginnings!  Do you think that's true?  Feels true.

This has been an action packed year with so much to be grateful for.  I haven't had birthday depression since I turned 30 (that was a hard one) and it snuck up on me this year. Truth is 59 makes me evaluate where I am, where I've been and where I'm going and I don't like some of the things my evaluation reveals.

In another day or two I'll pull myself up by my bootstraps and make a plan for being who I want to be.  For the next few days I'm just gonna eat the Best Ever Banana Cake.  I might eat it all!
Posted by Unknown at Thursday, August 04, 2011 5 comments: Links to this post